Romancing SaGa Re;univerSe is a role-playing mobile game developed by akatasuki and published by Square Enix in 2018 for iOS and Android devices. The game was released worldwide in 2020.

Romancing SaGa Re;univerSe is an RPG game with turn-based battles and exploration featuring an array of heroes from varying entries within the Romancing SaGa series.

Players can use in-game currency gems which allow them to summon heroes from varying games in the series. These heroes can be used in battles reminiscent of the Romancing SaGa series. The heroes can be equipped with weapons, armors and accessories. They also utilize skills reminiscent of their game of origin. The heroes can be trained in the Dojo using the experience accumulated from battle. Rather than leveling the heroes themselves, their Styles can be improved in the Dojo with the experience. The same hero with a different rarity can access the skills of the varying rarity through sharing their style. Style is what allows similar heroes to share their abilities and experiences. Leveling up Style will allow for stronger heroes.

Heroes can also go on expeditions which allow the player to receive items while also increasing the stats of the selected heroes in the process. 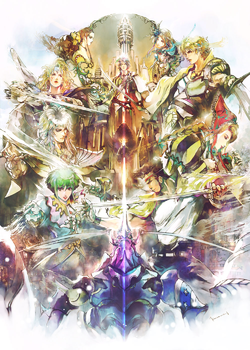 The game had its global closed beta released on 3/25/2020. All accounts made during the closed beta will be wiped following the beta's end.