SaGa Frontier​ is a role-playing video game developed by Square (now Square Enix) for the PlayStation and released in Japan on July 11, 1997. The game was later published by Sony Computer Entertainment (SCEA) in North America on March 25, 1998. It is the seventh game in the SaGa series and the first to be released on the PlayStation.

SaGa Frontier enjoyed commercial success, having sold over one million copies worldwide. The game was generally well-received in Japan and has been re-released under a few best-seller labels, as well as the PlayStation Store. However, it received largely mixed and average reviews in North America, mostly due to its ambitious Free Scenario System.

A remastered version of the game titled SaGa Frontier Remastered was released on April 15, 2021 with additional content in Japan and North America for the PlayStation 4, Nintendo Switch, and Steam.

The plot of SaGa Frontier takes place in a science fiction/fantasy universe called "The Regions", a group of worlds with varying degrees of culture, unique races, technology, and magic. The game allows the player to follow the exploits of one of seven protagonists, each with his or her own storyline and goal. The game's "Free Scenario System" offers a large amount of non-linear gameplay, allowing the player to freely travel between many of the Regions, interact with other characters, and take part in turn-based combat.

There are 7 main characters:

The basic concept of SaGa Frontier is based on its Free Scenario System, in which one can play as any of seven different protagonists, all of whom exist in the same setting: a solar system known as The Regions, a group of planets, each with its own culture, game-level of technology, and form of magic. The game is considered non-linear, in that from the beginning many of the characters are free to go almost anywhere and interact with almost anyone. Travel through most of the Regions is easy due to inter-regional ships traveling regularly between them. The player controls the protagonist on the field screen, a set of interconnecting pre-rendered backgrounds, and is able to speak with a slew of other characters in order to gather information, recruit party members, and initiate quests. Each character has his or her own storyline and a main quest to fulfill, but there are also several optional quests that any of the characters can participate in. Some of the main characters even encounter each other during their quests. The storyline of each character also changes depending on who is chosen, what is said in conversation, what events have already occurred, and who the protagonist has in his or her party, a concept first introduced in Romancing SaGa 2.

Combat in SaGa Frontier pits players against groups of enemies encountered on the field screen. The battle screen depicts 2D-animated sprites amidst a 3D-rotating background. Battles are turn-based, in which the player chooses his or her actions and allow them, along those of the enemies, to play out. A variety of weapons, special skills, and magic spells are at the player's disposal. Most skills are learned mid-battle, while many spells are purchased in the game's shops. If certain conditions are met within the battle, party members on either side can create combination attacks for added damage. Winning battles will increase player character statistics such as hit points (HP), life points (LP), strength, and quickness. Outside of combat, players can equip and unequip (or "seal") weapons, armor, skills, spells, and items. First introduced in the Game Boy incarnations of the SaGa series, the game contains different races that exist within the Regions: the Humans, the Mystics (similar to vampires), the Half-Mystics (half Human and half Mystic), the Monsters (shapeshifters) and the Mecs (robots). Some of the game's races are limited in this system. For example, Monsters cannot equip weapons, armor, or spells, while Mecs are capable of equipping parts from other Mecs to add more abilities.

The player is encouraged to complete each of the seven scenarios one after the other. For added incentive, beating a character's game and saving its completion to the system data adds some bonuses. After beating one character's game, essentially every character in the following game starts off stronger and with better gear than before, and may depend on how many battles players fought in their previous quest that they saved on the system data. Fulfilling all seven main quests allows the player access to the "2nd Division" room, in which the player can fight all final bosses and talk to the game's programmers.

SaGa Frontier was developed by the then-Square Production Team 2 (referred to as 2nd Division in the game) with Akitoshi Kawazu as director and producer, Koichi Ishii as planning chief, Kenji Ito as composer, and Tomomi Kobayashi as illustrator. Square Production Team 2 included Kyoji Koizumi, Miwa Shoda, Kazuko Shibuya, and Minoru Akao among others. Originally, the game entered development as the next entry into the Mana series around the time Romancing SaGa 3 released, but it was ultimately scrapped due to the development team not being able to settle on any particular idea. The game officially began development on January 22nd, 1996, at a development camp at Le Nessa Akagawa, located in Izu, Japan. The first three days of the camp were dedicated to building the worlds and the protagonists with only the planning staff, and the final two days were to work on attacks, game data, and game mechanics with the rest of the team. The planning staff consisted of Kawazu (Fuse, Miko-san), Ishii (Emelia), Hiroyuki Kuwata (Red), Akihiko Matsui (T260G), Shoda (Asellus), Yuko Sakamoto (Blue), and Koizumi (Riki, Fuse), with the planner for Lute's Scenario being unknown. Each planner created their own original character and region, but they also assisted with the other heroes throughout development.

Originally, the working title of this game was "Romancing SaGa 4" during early development. It was also referred to as Eternal Romance, Romancing Legend, Legend of SaGa, Legend of World, Eternal Frontier, Emerald Frontier, Dream Frontier, and Frontier SaGa throughout the first six months of development. The game was officially unveiled to the world as SaGa Frontier on August 2nd, 1997, in issue 398 of Weekly Famitsu, with a release date of March, 1997. The game officially entered full production one month before said issue was published. At that point in time, two more Scenarios were also being developed in addition to the existing seven. One of them was Fuse, the IRPO agent who may be enlisted as a playable character in the actual release. Fuse was supposed to be able to take part in other characters' Scenarios and his ultimate goal might be determined by what the player did in the course of gameplay. This was dropped around April, 1997, when Kawazu was forced to delay the release of the game to July, 1997. A planned but ultimately scrapped ninth protagonist, referred to as Itako and Miko-san by the development team, belonged to a family of spirit mediums who would fight over the inheritance of their former patriarch. This Scenario seemed to have been dropped during early development, most likely before November of 1996, due to being too comedic, and the character of Itako/Miko-san was repurposed to be what is now Princess Rei.

Due to time constraints, some plot points of several Scenarios were removed, the most famous of which belong to Asellus. During those events, Asellus was supposed to visit Dr. Nusakan's clinic, Bio Research Lab, Trinity Lambda Base, and Furdo's Workshop so that she would find her true identity and determine whether she would decide to live as a Human or as a Mystic. These quests were also intended to affect her Scenario's ending. These quests are still present within the original release of the game, but in a nonfunctional state. Emelia's Scenario was intended to end with a final showdown against Joker along with three more endings, one of which involved Roufas turning into Joker. Red's Scenario was intended to have a unique region called Santario, where the Hero Council and other Hero characters were located. The majority of Lute's Scenario was scrapped towards the end of the game's development, the majority of these events pertaining to Nelson, the IRPO, and Trinity. Blue's Scenario also had minor plot points pertaining to his history with Magic Kingdom removed, specifically the Region's Nursery. 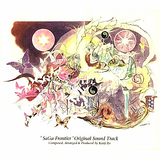 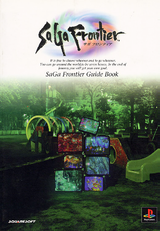 See also: Music of the SaGa series The musical score for SaGa Frontier was composed and arranged by Kenji Ito, who provided music for many previous entries in the SaGa franchise. SaGa Frontier Original Sound Track comprises 75 tracks spanning three compact discs. It was released in Japan on July 21, 1997, by DigiCube and was later reprinted by Square Enix on February 1, 2006. On disc 3 of the soundtrack, there is a hidden track in the pregap, which can only be heard when rewinding the CD from the beginning; this was originally supposed to be Riki's theme. There also are alternate titles for those pieces of music which can be seen in the songlist in the in-game "2nd Division". Itō states that he wanted to create an arranged album for the game as well, although one has yet to be released.

As of 2008, SaGa Frontier has sold over one million copies in Japan. It was the 5th top-selling game in Japan in 1997 and is currently the 15th top-selling PlayStation game for the region. In 2000, SaGa Frontier was voted the 18th best PlayStation game of all time by the editors of Famitsu magazine. Due to its popularity in Japan, the game has been re-released a number of times at a budget price: in 2000 as part of the Square Millennium Collection, in 2002 as part of the PSOne Books best-seller range, and again in 2004 as a part of Square Enix's Ultimate Hits line. Most recently in 2008, the game was released on the PlayStation Store in Japan.

SaGa Frontier received mostly mixed or average reviews in North America. The game currently holds a 73% on GameRankings, and an 8.0 out of 10 average at GameStats. Although many publications disagreed on positive aspects of the game, much criticism arose from its Free Scenario System. GameSpot called the game a "solid, if not exactly stellar, RPG that'll certainly keep you busy for a while - or at least until you tire of its occasional lack of focus". The website found the combat refreshing and many of its pre-rendered visuals to be well-done, but had many negative comments, specifically concerning the game's nonlinear nature and unfocused scenarios. IGN proclaimed SaGa Frontier to be "the only bruised apple in Square's current collection of role-playing games", similarly stating that the game's Free Scenario System can become confusing and easily cause the player to become lost. However, it labelled the story and sprite-based graphics its strong points. Game Informer notably found that the plot of SaGa Frontier is more of an outline than a descriptive formula as seen in other Square titles such as Final Fantasy VII and Chrono Trigger. The publication also criticized the game's graphics, but praised its length and gameplay. Staff reviewers at RPGFan and RPGamer agreeably noted the game's battle system to be its highlight; both websites mention that discovering combinations attacks to be "fun" and "exciting".