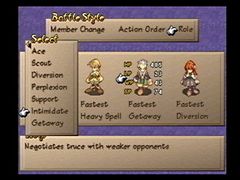 Roles are the class system of SaGa Frontier 2.

A "Role" can be assigned to any one character at a time (with the exception of "Solo Action") and it affects various stats or abilities in battle. Roles are unlocked at various points in the story, as well as when new characters join your party. You can assign Roles from the "Battle Style" sub-option from the options screen.

Roles can be Passive (Scout), Aggressive (Blitz, Diversion), Support (Defense, Support) or Diplomatic (Intimidate, Preemptive), and can be used to drastically alter battles in your favor depending on location and current enemies.

The following table lists the 28 Roles available in the game, their affect in battle, and who begins with the Role: