Romancing SaGa: Minstrel Song is the PlayStation 2 remake of Romancing SaGa published by Square Enix. It was released in 2005.

Aside from changing the 16-bit graphics of the SNES into 3D-style graphics, several characters have been changed in design, the battle system and class system was changed and a few new characters were added/removed. Minstrel Song received mixed to positive reviews when released in North America, although the game was better received in Japan. The game was, however, never released in Europe or PAL regions. 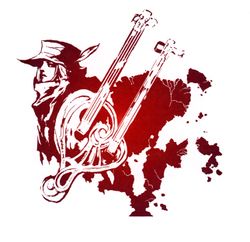 Once The Evil God Saruin, his brother Death and his sister Schirach fought a battle against the other Gods and their mortal children. The God Elore created Fatestones and gave them to the hero Mirsa in order to save the world. He gave his life to defeat Saruin and seal him, the Fatestones being scattered all over Mardias.

Many centuries later, this legend slowly grows forgotten, but signs appear that the return of Saruin is near. Who might be able to defeat the wicked God if he returns to Mardias? Can the Fatestones really prevent his revival, and if so, where do they now lay dormant?

All 8 characters from the SNES original make a return, but many are re-designed.