SaGa Scarlet Grace is the a title in the SaGa series, released in December 2016 for the PlayStation Vita in Japan.

An enhanced edition of the game titled SaGa Scarlet Grace: Ambitions (サガ スカーレット グレイス 緋色の野望, SaGa Sukāretto Gureisu: Hīro no Yabō?) was also released for the Nintendo Switch, PlayStation 4, on August 2, 2018 in Japan, which featured a few enhancements to fix minor gameplay issues as well as additional story content. The global release of the enhanced edition of the game was announced in 2019 at E3.

At the beginning of the game, you take a short quiz that will select a protagonist for you to play as. You can choose not to follow the quiz's selection, but depending on how you answer, the quiz can give the protagonists boosts in some of their stats.

The first chapter of Urpina's scenario starts much like a regular rpg, with Urpina having a set goal to complete. Once her first chapter is completed, there is more freedom to explore and do events. Urpina is recommended for series beginners.

Leonard's scenario offers the most freedom and events out of the four available scenarios.

The first chapter of Taria's scenario starts much like Urpina's scenario, with the first chapter revolving around a set goal and the subsequent chapters opening up. However, as Taria focuses on casting rather than being a straightforward attacker, her abilities may be more difficult for beginning players to use effectively.

His scenario offers the least amount of freedom overall. Depending on the player's actions, his scenario may become even more constrained. [1]

In the enhanced edition, a new game+ feature has been added, allowing you to choose elements to carry over in additional playthroughs.

Elements Carried Over After First Playthrough

Elements Able to Carry Over After Second Playthrough

Elements Able To Carry Over After Clearing All Four Scenarios 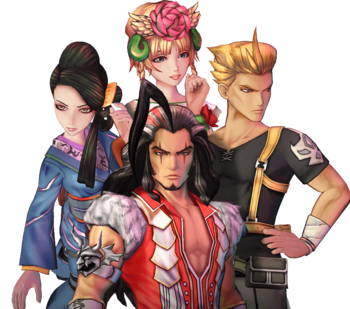 Official render of the cast. From left to right: Taria, Urpina Leonard, Balmant.

Firebringer—an evil god, banished by the star gods for his betrayal. He is turned into a comet and sent away. Other dark demons that have been suppressed begin to become violent and the world falls into chaos.

The star gods grant power to one man. He leads the people in a war against Firebringer and establishes an empire.

Over time there are emperors who prepare diligently and defeat the evil god easily, but there are also emperors who are careless and drive the world into ruin.

Finally, after a seventh invasion, the evil god’s star was decimated. The war that lasted 1,000 years is brought to an abrupt stop. The people rejoiced to usher in peace.

Fragments of Firebringer rain down onto the earth, like fireworks celebrating the victory of the humans and star gods. If Firebringer is extinguished, even the empire would become unnecessary.

The empire continues to rule, and many places react with rebellion. This ties into a civil war by the emperor’s son and company. Amidst the chaos, a hero brings down Firebringer, the emperor is assassinated, and the empire collapses.

Hardly anyone who remembers the era of the empire is around anymore. The world remains in chaos. No one notices a new danger approaching. However, a new hero arises for the new era.[3] 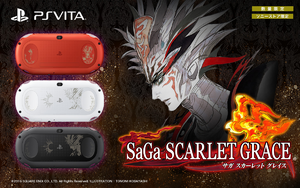 SaGa: Scarlet Grace was released on December 15, 2016 exclusively for the PlayStation Vita.

The Firebringer is prominently featured in the cover artwork for the game's releases.